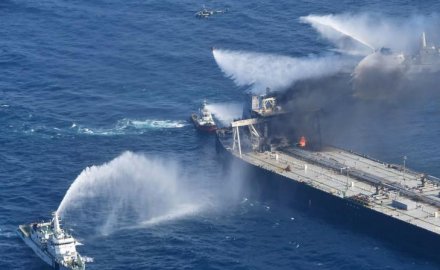 The marine market is readying for another potential loss as the oil tanker MT New Diamond is still engulfed in flames off the coast of southern Sri Lanka — days after a fire broke out on board.

After a boiler explosion in the engine room, a fire broke out on board on September 3. The Sri Lanka Navy, Sri Lanka Air Force, Sri Lanka Ports Authority, the Indian Navy and the Indian Coast Guard have been working to extinguish the fire.

One crew member from the Philippines has died, while 22 remaining on board were rescued. The 270,000 metric tons of crude oil remain on the ship.

An official statement from the Sri Lankan Navy said however, that there is no risk of an oil spill. “Necessary steps are being taken to prevent the fire from spreading to those crude oil storage facilities.”

“Efforts are on to prevent the fire from spreading to the cargo oil. No information has been received of an oil spill yet. Firefighting continues,” the statement added.

Despite these assurances, the market is preparing for another

InsuranceAsia News (IAN) has reached out to market players for comment on the claims and loss adjusting side. Tanker fires are usually covered under traditional marine policies.

The fire is occurring only six weeks after the disastrous MV Wakashio oil spill off the coast of Mauritius. Shipowner Nagashiki Shipping holds cover from Japan P&I Club, who said they are making “internal estimates” on the claims cost and don’t have public figures to disclose yet.

For more on navigating marine risks and profitability, see here.

MT New Diamond is a large, crude oil tanker built in 2000; it flies the Panama flag.